For most people, the word “doula” is associated with the beginning of life. But for Alua Arthur, a certified Death Doula, it refers to anyone who helps with a transition. Since 2013, she’s helped many people transition through the end of life.

But despite the nature of her career, her story is full of joy, discovery and infectious belly laughs. And, naturally, loss. Because life happens. 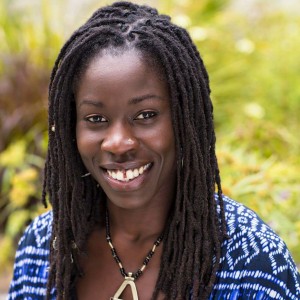 Alua is the first person profiled in The Resilient, a podcast of intimate interviews brought to you by Flower and Pillowfort Productions. The Resilient is a series of stories told by people who, like Alua, have faced personal challenges that gave them the strength, the tenacity and the fortitude to change their lives, even when it didn’t seem possible to keep going. It celebrates the their choices, their mistakes, and the amazing things that happened because.

It’s about a British computer scientist who never imagined she’d be decorated by the Queen thirty years after she left a violent husband on Christmas Eve, with three young kids and a suitcase full of diapers.

It’s about a little girl who was separated from her sister in war-torn Europe, and their reunion 60 years later.

It’s about a first-time mother. An inmate at the end of his sentence. A refugee. A reluctant caregiver taking time out from her career to help her Dad.

The Resilent gives space and time to the voices of powerful everyday people who inspire; they aren’t experts in resilience because they’ve trained, but because they’ve lived. They’re people – like you and me – who’ve been through tough times and have survived.

I’m an award-winning broadcaster for the BBC, and award-winning podcaster for The Guardian. I’ve spent the last two decades making programmes about social psychology: how we interact, influence and learn. And when Jean phoned me up last October to pick my brains about a podcast, neither of us expected this series to play a significant part in my own transition.

There’s a reason Alua’s is the first story I sought out.

Listen, and be inspired.

This episode of The Resilient was produced and presented by Aleks Krotoski and Pillowfort Productions. Original music by Ryan Harper. The podcast was mixed by George Lavender.

This entry was posted in The Resilient and tagged Aleks Krotoski, Alua Arthur, podcast, resilience. Bookmark the permalink.